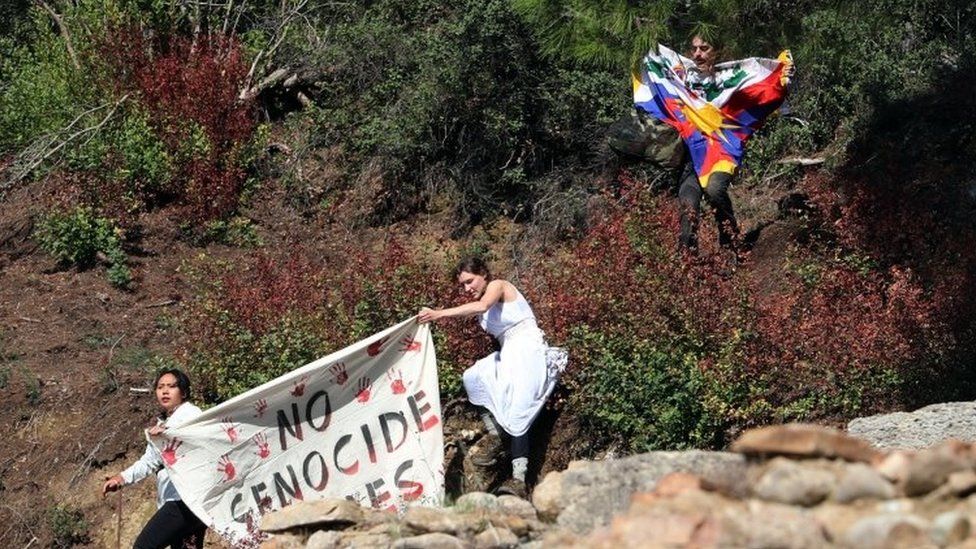 Two women attempted to hang a banner from the Acropolis in Athens Sunday morning in protest at the upcoming Beijing Winter Olympics, and were detained by Greek police, reports the Washington Post.

The activists, 18-year-old Tibetan student Tsela Zoksang  and 22-year-old exiled Hong Kong activist Joey Siu, both American citizens, are members of the “No Beijing 2022” campaign, a statement from the New York-based organization Students for a Free Tibet said.

Before their release earlier today, the activists Tweeted, “We have been involuntarily detained by the Greek authorities without reason. We were standing on the side walk where the other police told us we can stand. No one even has a tibet t-shirt on. We just look Tibetan. Before being detained we were tailed by 3-4 Chinese plain clothes officers. When the Greek authorities came over, one of them was liaising with the Chinese under covers.”

The Committee on Present Danger: China (CPDC), the Captive Nations Coalition (CNC), Women’s Rights Without Frontiers (WRWF), and the Stop the 2022 Genocide Games coalition (GenocideGames), call for just treatment of the activists Joey Siu and Tsela Zoksang  of the No Beijing 2022 campaign without further interference from CCP operatives.

The two activists were arrested at the Acropolis in Athens, Greece while attempting to unfurl the national flag of Tibet and a “Free Hong Kong, Revolution of our Times” banner, as they shouted slogans calling for the boycott of the upcoming 2022 Winter Olympics in Beijing.

It is deeply troubling that these activists were taken into custody for expressing sentiments such as “No Freedom, No Games” and “Free Tibet” while the Chinese Communist Party, which is responsible for countless human rights violations and atrocities, is being allowed to host the Olympics in China.

Some of those violations and atrocities include: the detainment of millions of Uyghurs, Kazakhs, and other Turkic people in concentration camps; cultural repression of Southern Mongolia and Tibet; degradation of freedoms in Hong Kong; forced organ harvesting of Falun Gong practitioners and of Muslims; and persecution of Christians and other religious minorities.

The Committee on Present Danger: China, the Captive Nations Coalition, Women’s Rights Without Frontiers, and the Stop the 2022 Genocide Games Coalition, strongly urge the Greek authorities to uphold their country’s historic commitment to freedom and uphold the right to peaceful protest for, Joey Siu and Tsela Zoksang. Additionally, we request the Greek authorities ensure the prompt return of both women to the United States.

To support these courageous activists and ensure their message is carried on, concerned citizens are encouraged to sign the petition to move or boycott the 2022 Winter Olympics at GenocideGames.org.

NOTE:
The Stop the 2022 Genocide Games coalition is co-sponsored by the Committee on the Present Danger: China and Women’s Rights without Frontiers.