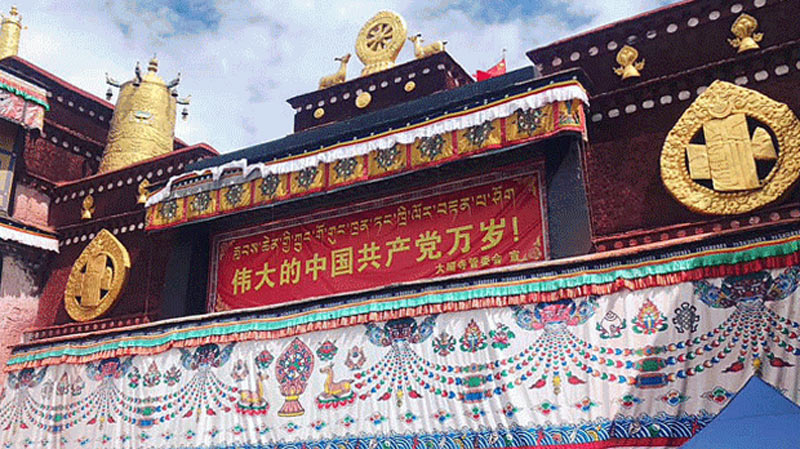 A banner praising the Chinese Communist Party hangs from the front of the Jokhang Temple in Tibet’s regional capital Lhasa in an undated photo.

The agreement was forced on Tibet by China, which threatened all-out war if Tibetan negotiators didn’t bow to Beijing’s demands.

A controversial 17-Point Agreement between China and Tibet leading to Beijing’s takeover of the independent Himalayan country was signed by Tibet in 1951 under duress, and was quickly followed by violations of its terms by China, rights groups and experts said on the 70th anniversary of the document’s signing.

Writing in a government White Paper released on May 21, two days before the 70th anniversary of the document’s May 23, 1951 signing, China said the agreement had freed Tibet to move forward on a “bright road of unity, progress and development with all the other ethnic groups of China.”

However, language used in the agreement makes clear that Tibet was a self-governing region with its own government, army, culture, and traditions, Chung Tsering—a lecturer in Tibetan language at the Australian National University—told RFA’s Tibetan Service in an interview.

“Among the 55 minority ethnic regions in China, Tibet is the only one with which the Chinese government has made such an agreement. And we have to consider that this makes Tibet unique and distinct,” Tsering said.

“If we look at the 17-Point Agreement in detail, one can see that Tibet is shown to have the features of a proper country with its own government, political and religious leader, distinct social and cultural norms, military, and language,” Tsering said.

“And now, when one looks at this agreement even after 70 years, these facts are even more clear,” he said.

The agreement was forced upon Tibet by China, which had defeated Tibetan forces in the eastern part of the country and was threatening full-scale war in the rest if a delegation sent by the Tibetan government to negotiate in Beijing did not bow to Chinese demands, experts say.

“And China later showed no inclination to honor its own part of  the agreement,” including pledges not to interfere with the functioning of Tibet’s government or with the status and role of Tibet’s ruler and spiritual leader the Dalai Lama, said Jigme Yeshe, an assistant professor in the Department of Political Science at the University of Calcutta.

“They immediately set out to inflict unbelievable atrocities upon the Tibetan people in order to hasten their occupation of Tibet and destruction of Tibet’s unique identity,” Yeshe said.

“This was forced upon the Tibetan government by Communist China,” agreed Tsangtuk Topla, a professor at the College for Higher Tibetan Studies in Sarnath, India, adding that China refers to the 17-Point Agreement now “to justify its occupation of Tibet and also to gain moral and international legitimacy for its claims on Tibet.”

But China quickly broke its promises to respect and protect “the religious beliefs, customs and habits of the Tibetan people,” Topla said. “And therefore, His Holiness the Dalai Lama refuted the agreement in Tezpur in India in 1959,” in a statement made to the international community.

China’s policies and behavior in Tibet today show how far Beijing has moved from the promises it made 70 years ago, Washington-based International Campaign for Tibet said in a May 21 statement marking the anniversary of the document’s signing.

“In the seven decades since the agreement, the Chinese government has unilaterally instituted increasingly hardline policies that undermine Tibetan culture and religion [and] deny freedom of expression to the Tibetan people,” ICT said.

It has also downgraded the use of the Tibetan language and claimed Tibet’s natural and economic resources for the use of the Chinese state while flooding the region with growing numbers of Chinese migrants, the rights group said.

China has denied the history of Tibetan independence, ICT said, and misrepresents the Middle Way policy approach of the exiled Dalai Lama, who now accepts Tibet’s status as a part of China while urging greater cultural and religious freedom, including strengthened language rights, for Tibetans living under Beijing’s rule.

“The Dalai Lama’s position of seeking genuine autonomy for all Tibetans within the framework of the People’s Republic of China has not only been presented by his envoys to the Chinese government, but also subsequently made public,” ICT said.

“China cannot fool the international community about the Dalai Lama and his commitment to resolve the Tibetan problem through a mutually satisfactory solution.”

Chinese authorities are now tightening security measures in Tibet as China approaches another landmark date, the 100th anniversary in July of the founding of the Chinese Communist Party, London-based Free Tibet said in a May 25 statement.

“The moves are likely an attempt to intimidate Tibetans away from protesting the occupation of their country during the planned celebrations,” the rights group said, adding that Tibetan monks and nuns at Central Tibet’s Dorje Drak monastery were recently forced to sign banners supporting Communist Party policies.

Hundreds of others in monasteries in Tibet’s regional capital Lhasa have been tested on their knowledge of Chinese communism and laws, Free Tibet said, while at the end of April preparations for the coming centenary included the forced production of calligraphy “celebrating the Chinese government and propaganda.”

In a statement, John Jones—Campaigns and Research Manager at Free Tibet—said world leaders should no longer put trade before Tibetan lives and “stand idly by while Tibet is slowly wiped off the map.”

Beijing’s repression and efforts to block the truth about Tibet will grow “exponentially worse when the world’s eyes are on China for the 2022 Winter Olympics,” Jones said.

“If countries want to avoid whitewashing these abuses then they should change their plans to send athletes to Beijing next year, and boycott the Chinese Communist Party’s Winter Games.”

Calls for an Olympics boycott have risen this year, with critics citing not only Tibet, but also the mass incarceration of Uyghurs and other Turkic Muslims in adjacent Xinjiang and the deepening repression of Hong Kong since Beijing’s imposition of a harsh national security law in mid-2020.

The Dalai Lama and thousands of his followers fled into exile in India and other countries around the world following a failed 1959 national uprising against China’s rule.